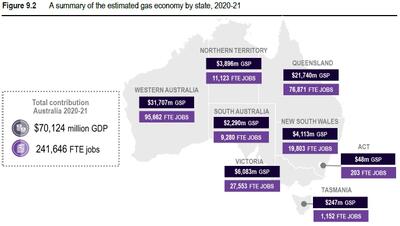 NEW research sheds light on the vital contribution gas makes to the national economy, as well as across each state and territory, and its irreplaceable importance to growing our modern manufacturing base.

Economic analysis by ACIL Allen Consulting for Gas Energy Australia shows that gas generates over $70 billion-a-year in domestic economic activity to underpin 3.4% of GDP, while supporting more than 241,600 Aussie jobs – 2.25% of all jobs. It is forecast to grow markedly next year.

"A future made in Australia will be built on gas and, increasingly, by renewable net zero gases," Gas Energy Australia CEO Brett Heffernan said today.

"These figures are conservative as they do not include the commercial use of gas in the economy, such as cafes, restaurants, forklifts and the like. We know they add to gas' economic contribution, but official government data and modelling becomes sketchy at this point in the supply chain so has been omitted.

"Beyond gas production, which is the dominant economic driver at over $40 billion and 109,284 Aussie jobs, the report underscores the importance of gas to Australia's electric power generation and irreplaceable role in manufacturing, for both industrial heat and feedstock."

The report shows that gas contributes the following:

"Either for industrial heat in excess of 800 degrees Celsius, which electricity cannot muster, to process the things we all use like glass, bricks, ceramics and alumina, or as a feedstock (ingredient) in making plastics, fertilisers, pharmaceuticals, rubber, propellants, refrigeration, adhesives, cosmetics, to list just a few... gas cannot be replaced," Mr Heffernan stressed. "It is, and will continue to be, essential.

"Australian governments are pressing headlong into a brave new world where all the energy needs of today, plus the growing needs of new homes and businesses, as well as electric cars, bus and small truck fleets, and the void left by coal's rapid departure from the grid, can hopefully be filled by intermittent renewables.

"To be clear, we support solar, wind and batteries. They will provide power... some of the time. As governments move to rely more and more on these sources, increasingly they will need gas – including renewable, net zero gases – to fill inevitable gaps.

"But the security and low-progressing-to-net zero emissions of gas as a guaranteed source of energy goes beyond much-needed back-up for electricity grids.

"Produced in perpetuity, emerging green gases can supply existing home appliances and commercial equipment, making gas the most secure choice of all renewables. Sticking with gas will save homeowners and businesses tens of thousands of dollars each, negating the need to switch to overburdened and less reliable electricity, while still achieving net zero by 2050.

"Biomethane, from organic waste, is already being produced around Australia and used for generating electricity. The next step is to tap into gas networks to decarbonise, with Sydney Water and Jemena now working to inject biomethane into the gas distribution network.

"Hydrotreated Vegetable Oil is a diesel-like fuel that processes renewable waste to make Sustainable Aviation Fuel. This will be a major new industry in Australia that produces renewable LPG as a by-product. Several sites are already scheduled for construction across the country.

"Whether we realise it or not, gas is, and will remain, an intrinsic feature in all of our lives. Be it a sneaky snag at Bunnings on the weekend, families snug by the heater in winter, fuelling entire communities and industries in meeting their everyday needs, Australian gas is here to stay."

As the image attached above illustrates, ACIL Allen has mapped the footprint of gas across the national economy, and state-by-state, to give a clear picture of Australia's reliance on gas. The report notes these numbers are Covid-affected, so lower than usual, but anticipated to grow substantially next year.

The full ACIL Allen Consulting report, Economic Contribution of the Australian Gas Economy 2020-21, is available to media upon request. More details are available from the Gas Facts page of this website.

Letters to the Editor