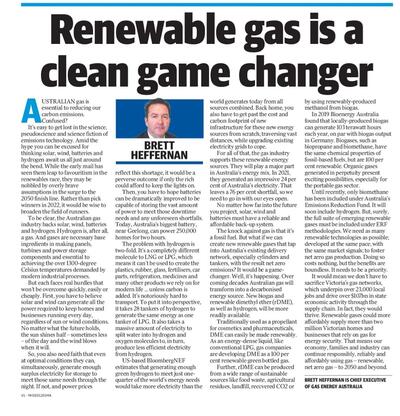 AUSTRALIAN gas is essential to reducing our carbon emissions.

It's easy to get lost in the science, pseudoscience and science fiction of emissions technology. Amid the hype you can be excused for thinking solar, wind, batteries and hydrogen await us all just around the bend. While the early mail has seen them leap to favouritism in the renewables race, they may be nobbled by overly brave assumptions in the surge to the 2050 finish line. Rather than pick winners in 2022, it would be wise to broaden the field of runners.

To be clear, the Australian gas industry backs solar, wind, batteries and hydrogen. Hydrogen is, after all, a gas. And gases are necessary base ingredients in making panels, turbines and power storage components and essential to achieving the over 1,300-degree Celsius temperatures demanded by modern industrial processes.

But each faces real hurdles that won't be overcome quickly, easily or cheaply. First, you have to believe solar and wind can generate all the power required to keep homes and businesses running every day, regardless of sun or wind conditions. No matter what the future holds, the sun shines half – sometimes less – of the day and the wind blows when it will.

So, you also need faith that even at optimal conditions they can, simultaneously, generate enough surplus electricity for storage to meet those same needs through the night. If not, and power prices reflect this shortage, it would be a perverse outcome if only the rich could afford to keep the lights on.

Then, you have to hope batteries can be dramatically improved to be capable of storing the vast amount of power to meet those downtime needs and any unforeseen shortfalls. Today, Australia's biggest battery, near Geelong, can power 250,000 homes for two hours.

The problem with hydrogen is two-fold. It's a completely different molecule to LNG or LPG, which means it can't be used to create the plastics, rubber, glass, fertilisers, autoparts, refrigeration, medicines and many other products we rely on for modern life ... unless carbon is added. It's notoriously hard to transport. To put it into perspective, it takes 28 tankers of hydrogen to generate the same energy as one tanker of LPG. It also takes a massive amount of electricity to split water into hydrogen and oxygen molecules to, in turn, produce less efficient electricity from hydrogen.

US-based BloombergNEF estimates that generating enough green hydrogen to meet just one-quarter of the world's energy needs would take more electricity than the world generates today from all sources combined. Back home, you also have to get past the cost and carbon footprint of new infrastructure for these new energy sources from scratch, traversing vast distances, while upgrading existing electricity grids to cope.

For all of that, the gas industry supports these renewable energy sources. They will play a major part in Australia's energy mix. In 2021, they generated an impressive 24 per cent of Australia's electricity. That leaves a 76 per cent shortfall, so we need to go in with our eyes open.

No matter how far into the future you project, solar, wind and batteries must have a reliable and affordable back-up system.

The knock against gas is that it's a fossil fuel. But what if we can create new renewable gases that tap into Australia's existing delivery network, especially cylinders and tankers, with the result net zero emissions? It would be a game-changer. Well, it's happening. Over coming decades Australian gas will transform into a decarbonised energy source. New biogas and renewable dimethyl ether (rDME), as well as hydrogen, will be more readily available.

Traditionally used as a propellant for cosmetics and pharmaceuticals, DME can easily be made renewably. As an energy-dense liquid, like conventional LPG, gas companies are developing DME as a 100 per cent renewable green bottled gas.

Further, rDME can be produced from a wide range of sustainable sources like food waste, agricultural residues, landfill, recovered CO2 or by using renewably-produced methanol from biogas.

In 2019 Bioenergy Australia found that locally-produced biogas can generate 103 terawatt hours each year, on par with biogas output in Germany. Biogases, such as biopropane and biomethane, have the same chemical properties of fossil-based fuels, but are 100 per cent renewable. Organic gases generated in perpetuity present exciting possibilities, especially for the portable gas sector.

Until recently, only biomethane has been included under Australia's Emissions Reduction Fund. It will soon include hydrogen. But, surely, the full suite of emerging renewable gases must be included under ERF methodologies. We need as many renewable technologies as possible; developed at the same pace, with the same market signals; to foster net zero gas production. Doing so costs nothing, but the benefits are boundless. It needs to be a priority.

It would mean we don't have to sacrifice Victoria's gas networks, which underpin over 23,000 local jobs and drive over $107bn in state economic activity through the supply chain. In fact, they would thrive. Renewable gases could more affordably service more than two million Victorian homes and businesses that rely on gas for energy security. That means our economy, families and industry can continue responsibly, reliably and affordably using gas – renewable, net zero gas – to 2050 and beyond.

Next Latest News:
12/5/2022 To be ship shape Australia's new fleet must be geared for gas

Letters to the Editor

A reliable, renewable & affordable energy future? The answer is gas