The liquefied petroleum gas (LPG) industry took off in Australia's great post-war wave of infrastructure investment in the 1950s. The leading players were quick to set up the Australian Liquefied Petroleum Gas Association (ALPGA) to sort out technical and safety standards
for the new industry.

It was all hands to the pumps as key players gave freely of their time to set the ground rules for an industry starting from scratch. The Australian gas sector has flourished ever since to be a national success story, a major economic contributor catering for manufacturing, industry, business and household needs ever since... 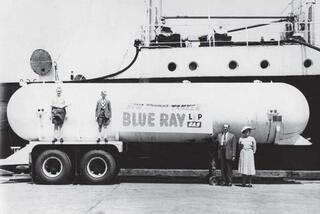 In 1957, Steventon imported the first long-haul LPG tanker into Australia from the United States.

The oil refinery era had arrived and the Australian industry was turning out a good supply of the new-fangled gas that was
easily liquefied and packed a big energy punch.

LPG was starting from scratch down under, but the successful American industry had shown the
way it could replace wood, coal and oil fuel. The market was wide open and it quickly became a growth industry.

Oil and gas companies, and the Westralian Farmers' Co-operative Ltd (the farmers' co-op), were suddenly scrambling to tie up distribution and sign on new customers before any competitors arrived on the scene.

It was clear that they needed an association to lay the ground rules for handling this new, cleaner and portable but flammable gas.

The gas-rush was a symptom of an Australia on the move after the restrictions of World War II. Like the fledgling car industry, a lead came from the USA where LPG had developed as a 'wonder industry' and was nearly 50 years old.

The American LPG industry claims it all began in 1910 when a motorist reported that his car's gasoline was evaporating and wanted the disappearing fumes checked out. A government chemist separated butane and propane, later using the combination to power a farm in Pennsylvania on the 17th May, 1912.

The LPG industry marks this as its birthday.

"You ought to get out of the motor garage business and distribute this. It's the up and coming fuel of the future."

Steventon took up the challenge and became our industry's go-it-alone pioneer. He was starting from scratch, first selling gas he imported from America to caravan owners, then securing a local supply and even making his own equipment and appliances.

Western Australia made its own start through the farmers' co-op, which began marketing oil products to break a kerosene monopoly. In 1925, an American oil company invited Walter Ashton, a young ex-farmer working for the farmers' co-op, to come to the US to plan the introduction of petrol retailing in Australia. He received a crash course in the US oil industry,
which was rapidly developing LPG as a sideline.

This opportunity stimulated an interest that would see Ashton qualify as the inaugural Chair of the ALPGA some 30 years later. The Association was founded at a joint meeting of 36 distributors of LPG, and equipment and appliance manufacturers held in Sydney on Monday 10 February 1958.

For more information on the evolution of the Australian LPG industry visit our Publications page for the Then to Now: 50 Years of LPG in Australia or to learn more about Australian gas, LPG and its origins. For the modern and ever-evolving contribution of gas in Australia, checkout Gas Facts.

Gaslighting over costs of energy switch